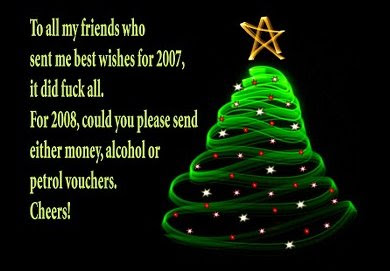 I saw this and I just couldn't help but laugh.

Merry Christmas to you all
Posted by Soul Seared Dreamer at 08:20 11 comments:

Things 'appen For A Reason

I’m sure somebody wise said something along the lines of ‘things happen for a reason’.. (or the other one) ‘for each door that closes, somewhere else another opens’.

Personally I think some pleasant person made them up to make some sad fucker’s shitty day a little more bearable.

I didn’t get that job I applied for.

I’m not gonna lie… it hurt. It hurt bad. I was really cut up about it when I found out.

And it was totally made worse by the hesitance in the guy’s voice as he told me that the other candidate was chosen over me for the simple reason that he had more relevant experience than me. And I heard the reluctance he felt in telling me this. He even said that he didn’t want to inform me by a letter but wanted to actually speak to me coz apparently I gave the better interview. He actually apologised to me. Ultimately it wasn't just the interview he could go on. Fuck that was a hard conversation to partake in. Can you believe it.. my voice actually wavered and I barely held myself together to speak to him.

Now whilst I was pretty upset about it at the time if I’m being honest here I’m surprised I got called for the first interview. I knew that the colossus lack of relevant experience was a huge issue, but they put me through that stage and forwarded me into a second round and maybe it was that that had made me replace shock with hope.

You can all breath a sigh of relief I'm fine about it now.

So whilst I originally had thought that I would take the time around x-mas and new year off to chill I found myself contacting a couple of recruitment agencies and I’m like inundated with interviews from potential recruitment agencies.. hell its flattering when you’re CV has been out there for less than an day when you’ve been invited for 3 interviews. I turned two down.. they weren’t even close to what I’m looking for. But the third has potential. It’s not perfect but it’s a close 17th (well it definitely isn’t a close 2nd).

I’ve arranged an interview for coming Thursday.. more than actually interviewing for them or for the job.. I’ll be approaching this as me interviewing them, it’ll be up to them to prove to me they can offer me what I want. Apparently of all the CVs they were presented with I’m the only one being interviewed.. I’m thinking they’ll be vex to know that the recruitment consultant told me that (ok I forgot to mention he is an old acquaintance.. who hooked me up with my current job at Lloyds TSB.. and I love that job)

A Question Of CAPS

I have a question.

After getting honey, or rather giving honey.. is anyone ever.. still wanton?

OK not really honey but.. err ok lets start at the beginning coz I think I’m losing the plot.. I bumped into an old flame.. who lets just say is HOT. At the time we first met (quite some time back) we were both firmly in the closet and whilst I kinda caught on that he might be gay I never said anything despite the strong chemistry between us. Time moved us both on and I never saw him again until just now.. which was kinda random really.

I had gone into town to get a couple bits and pieces and quite literally crashed into him.. I apologised and only after I did so, did my eye catch his and I recognised who he was.. he was with his family and in typical fashion I’m wagering he still isn’t out. We quickly briefed the other on where we were in our respective lives now and how much had changed since we last met. When his family realised he might be there a while they excused themselves.

He told me that he had moved back to Kenya (he was originally from there) and I felt his hand ‘cup’ my ass as he put his arm around my waist, as he led me to the benches after I suggested we sit down. Almost as soon as there was contact I felt his hand disappear. Obviously he realised this might not be okay and pulled his hand away. Maybe it was a test, or maybe he hadn’t consciously realised what he was about to do. Now I don’t know how people are supposed to react in a situation like that so I looked back towards my right and traced a line from my backside to his hand.. making it clear I had caught the contact. Responsively I raised an eyebrow and gave him a look. He awkwardly apologised and blushed quite visibly. I looked around for his family, they were nowhere in sight so I leaned in closer.. surprisingly I didn’t flinch at all during this (nor did he).. despite this being a main shopping centre and the fact that there was bound to be at least one person within eye-range who knew me.. I did so, placing my hand deliberately on his upper chest and whispered in his ear ‘I’m not straight.. never have been and never will be.’

Despite how gay we would have looked leaning that close together, with my hand on his chest like that, we choose still to speak in whispers. This time he whispered in my ear ‘I need to see you naked right now. Come with me.’ It wasn’t a suggestion.

He led me towards the toilets. Now I’m a man of class and I don’t do public toilets. Ever. So outside (this is a corridor) I said this wouldn’t work for me. The look he gave me and the ‘please’ he uttered, had me hooked and I followed him into the mens.

We found a stall and well lets just say he saw me naked pretty fast and his lips were heaven.

As I reach in towards him to unbuckle his jeans, he stops me. My penis slips out of his hand but I see him follow it. I don’t know why it is like this but everyone seems to want to blow me and are happy for it to be one way. I look into his eyes.. for a few seconds we just stare at each other. I’m trying to figure out what is on his mind.

30 seconds pass and then the following conversation occurs:

Well I've been meaning to give my blog a new look.

I've been playing around with some ideas and well I find that this one works for me.

The hunk is Mr Nick Beyeler.

So what do you think.. does everyone like the new look?

I'm not going to boast, oh hell who am I kidding.. I'm so going to totally boast.. I did it myself. And for someone who has never really played around with HTML.. I think this is quite an achievement. Don't you think?

[SSD pats himself on the back]

Good news.. the bitch is back.

Good news.. I'm free to do what the fuck I want.

Bad news.. all I want to do is sleep (sleeping at 1AM and waking at 5AM for over a week will have that effect)

Good news.. I have my interview callback tmrw

Bad news.. hell if I have my way there won't be any bad news regarding that ;o)
Posted by Soul Seared Dreamer at 13:59 8 comments:

I know I'm supposed to be away from eBlogger and whilst this is kind of cheating its not really a post... so I can almost justify it.

I saw this video thanks to a friend.... who shall remain unnamed (whats important is I REMEMBER THE NAME) - its almost like he knew I 'needed' this and hell it worked. I love you gezzer and whilst I know you don't read this I just need to get that out there. You give me strenght in ways I didn't know was possible.. thank you for pushing me that extra mile when that 50% pain just got too much.